Maple Ridge Parks, Recreation & Culture presents Happenings, our year-long program that offers opportunities to celebrate and participate through community activations and events! From family-fun, to our concert series to art in the great outdoors, Happenings has something for everyone.

This Summer, there will be something happening in Memorial Peace Park on Wednesdays and Fridays from 6:00 PM - 8:00 PM starting July 6 through to September 2. To top it all off, there will be food trucks at each of these activities/concerts in the south plaza off 224 Street! 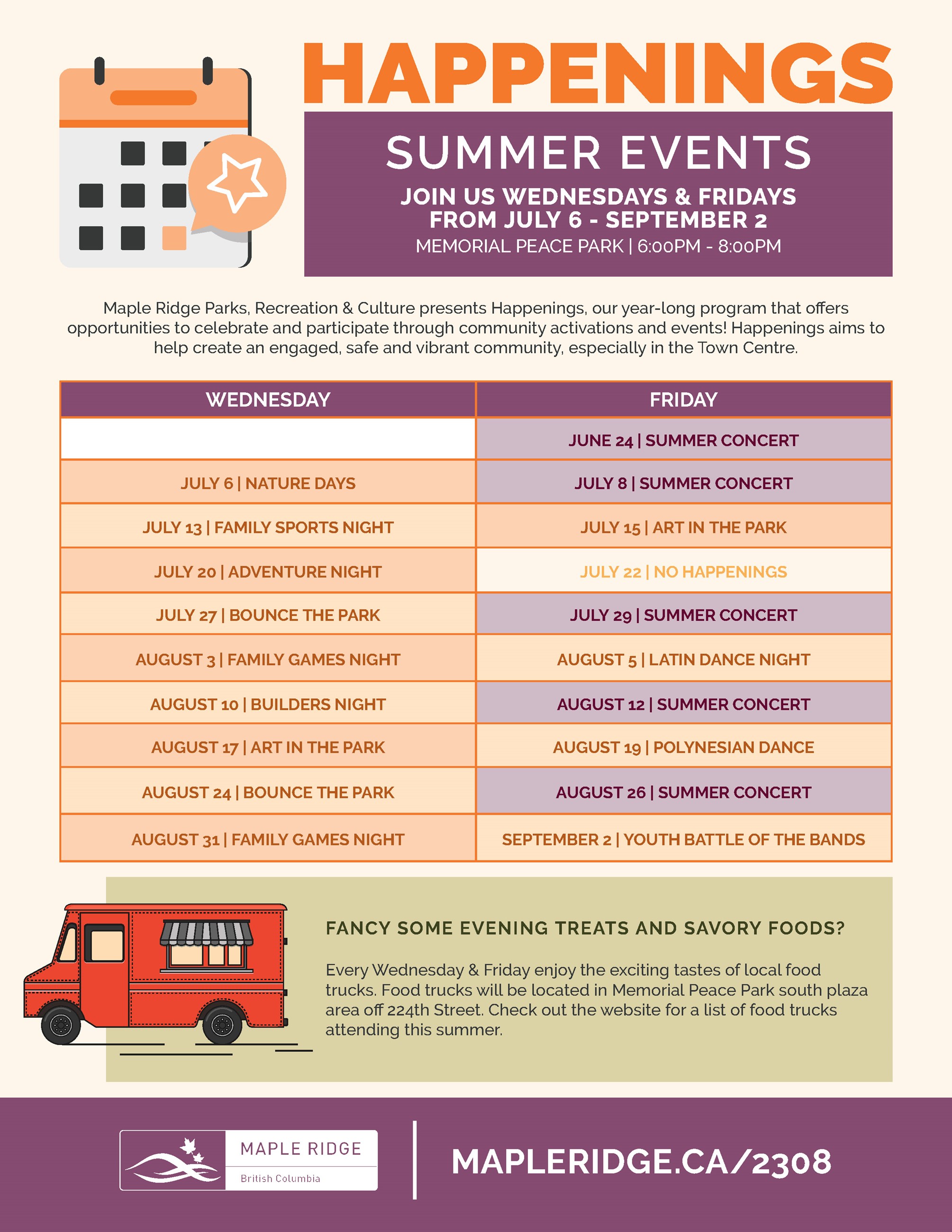 Asi Somos
Asi Somos presents their traditional Venezuelan music that encompasses European, Caribbean and African influences providing a style of music that is engaging yet unpredictable and haunting. Asi Somos represents and performs music from every corner of Venezuela, taking their audience on a journey of music and culture.

Marlin Ramazzini
Marlin Ramazzini, Juno Award Nominee, recipient of the Vancouver Inspirational Latin Awards and Guatemalan Cultural Association Award; is one of the most versatile and accomplished Latin singers on the West Coast, with a warm and sensuous voice that can tease out the essence of any song. Growing up in Guatemala, she was inspired to start singing by listening to Cuban son, cha cha cha, mambo, and other hot rhythms on the radio. After winning a major talent competition at the age of 12, Marlin realized that her destiny was to make music. Marlin settled in Vancouver in 1990, where she quickly became a pillar of the lively Latin scene, working with its leading artists.

Dalannah Gail Bowen
Dalannah Gail Bowen is a 76 year old Afro-Canadian Cherokee force of nature. She is a prolific singer, songwriter, actress, play writer, story teller, event producer, social activist, International Memphis Blues Awards semi-finalist (2017) and a Blues Hall of Fame Master Blues Artist (2015). There are many faces and many personalities to Vancouver based blues singer Dalannah. All of those personalities have something in common – a spark, joy, determination and a fire inside. Dalannah has been music-making for over forty years in the Canadian blues, rock and soul scene.

Paul Filek
Paul Filek is a Canadian Singer-Songwriter from Kamloops, BC who's released three albums since 2006 with Producer Henry Small (Formerly of the Band Prism) and most recently a five Song EP, Paper Planes And Spare Change, Produced by Jeff Dawson (Daniel Powter, State Of Shock, The Dudes). One thing that's certain is that Paul's confident, accomplished songwriting and performing are commercial in their appeal, as evidenced by his charting success on Canadian Radio. His smooth and effortless, funky vocals and heart-on-the-sleeve lyrics are infectiously hard to deny. His feel-good songs fit perfectly sandwiched between Maroon 5 and Train.

Nette
Nette kickstarted her career playing all over Vancouver, Canada, and gained attention for her storytelling and sultry smooth vocals. She brings an infectiously bubbly presence to her performances and her songs are a vulnerable yet optimistic glimpse into personal struggles, self-doubt, and self-discovery. She is an advocate for women in the music industry and is paving her way as an artist, songwriter, and producer. Through sharing her musical journey with others she has built an audience of over 175 thousand on TikTok.

Johnny Bootleg
Outfitted with a vintage Fender Strat and modern day drum machine, Johnny Bootleg breathes a whole new life into contemporary Rock music. Growing up in the suburbs of Vancouver BC, Johnny first picked up a guitar at age 10.  He taught himself to play and before long he was performing to stadiums, opening for artists like Biff Naked and Finger Eleven with the group, “Goodbye Beatdown”.  After winning the prestigious ‘FOX Seeds’ in 2009, Johnny left the band to start his own project called “Ocean Full of Fins”. Johnny’s captivating solo performances have established him as one of the premier event musicians in Canada.

Wyper and Parker
Step inside their world, stand in front of the kick drum, close your eyes and feel the energy, heart and soul of a R&B-infused rock band giving you everything they've got. A danceable, driving rhythm section, wailing bluesy guitars, and a singer who sounds like Rod Stewart and Joe Cocker's secret lovechild. Now open your eyes in shock and excitement to see it's all coming from a duo or trio.

Nicole Sumerlyn
Powered by endless energy, a lifelong gift for musical expression, and an unabashed love of performing, Nicole Sumerlyn has been engaging audiences in Western Canada for six years with a traditional country sound blended with a rock edge. Originally from Abbotsford, British Columbia, Nicole embraced music and performance at an early age. She made the Top 3 of the Vancouver Island Music Business Conference Song Race, was named one of the 2015 Global Country Star Search winners and after finishing as a Top 4 finalist in the 2017 Breakthrough Country Music Project, she performed live shows at the Calgary Stampede, Sunfest and the BCCMA Awards Weekend.

Antonio Larosa
The sound of Antonio Larosa's music has been described as a nostalgic yet fresh take on modern country-rock music. With vocal styles comparative to Elvis Presley and electric blues guitar inspired by Eric Clapton, Larosa writes music from the heart to the heart of his listeners. Antonio draws a large inspiration from artists such as Elvis Presley, Johnny Cash, Sturgill Simpson, Chris Stapleton, Eric Clapton, and The Eagles. His popular single “Hard Days” was written by Larosa and Producer Nygel Asselin (Half Moon Run) and mixed & mastered by CCMA & Juno award-winning Canadian producer Jeff Dalziel.

Are you a nature lover? Then join us for Nature Days as we celebrate our connection to the Great Outdoors. Enjoying crafting, storytelling, a bear safety workshop, and more!

Looking to get out this summer with the family? Then join our Family Sports Night and enjoy a variety of games and sports such as basketball, table tennis, hockey and more. This will be an active night to join other families and see who comes out on top!

Art in the Park

Art in the Park is an inclusive program that celebrates the arts in our community. Support local artists and community groups as you experience and participate in a variety of art forms, including visual art displays, artisan markets, dance and theatre performances, and more!

Do you like a challenge? Outdoor Adventure Night will test your skills and push you beyond your comfort zone. Take on the climbing wall, attempt the parkour course, or challenge your friend to a game of battle archery! There are a variety of activities to test your skills this summer.

Bounce! Bounce! Bounce your way to one of the most popular events of the summer! Enjoy a variety of activities that feature bouncing from trampolines, to bouncy castles, to bubble soccer and more. Don't miss out on the opportunity to bounce around at Memorial Peace Park.

Looking to spend some quality time with the family? We have you covered with Family Games Night! Try out a variety of giant games including jenga, checkers, chess and more. Looking for something a little more active? Then challenge the family to a round of mini golf.

When was the last time you got out for a night of music and dancing? Mix it up with some Latin beats at this exciting event. Sit back and enjoy performances from local dance groups or show off your footwork as you follow along to an instructor-led Salsa class!

Is there a budding builder in your family? Then join our Builders Night to create your very own project! This is a great way to get the kids involved and teach them a little about woodworking. We'll supply the material, tools, and know-how!

Art in the Park

Art in the Park is an inclusive program that celebrates the arts in our community. Support local artists and community groups as you experience and participate in a variety of art forms, including visual art displays, artisan markets, dance and theatre performances, and more!

Journey through Polynesia with this exciting and energy packed show from Paul Tavai-Latta Polynesian Dancers & Co! Featuring brilliant costumes and authentic dances, the show will take you on a tour of the islands including Tahiti, Hawaii, and New Zealand. Bring your chair, you won't want to miss this!

Bounce! Bounce! Bounce your way to one of the most popular events of the summer! Enjoy a variety of activities that feature bouncing from trampolines, to bouncy castles, to bubble soccer and more. Don't miss out on the opportunity to bounce around at Memorial Peace Park.

Youth Battle of the Bands

Support our young musicians as they take to the Bandstand to showcase their talents and battle it out for the Top Spot! After the concert, be sure to stick around for the outdoor movie and other activities.

Enjoy the exciting tastes of local food trucks! Food trucks will be located in Memorial Peace Park south plaza area off 224 Street during Summer Happenings on most Wednesdays and Fridays (6:00 PM - 8:00 PM) from July 6 - August 31!