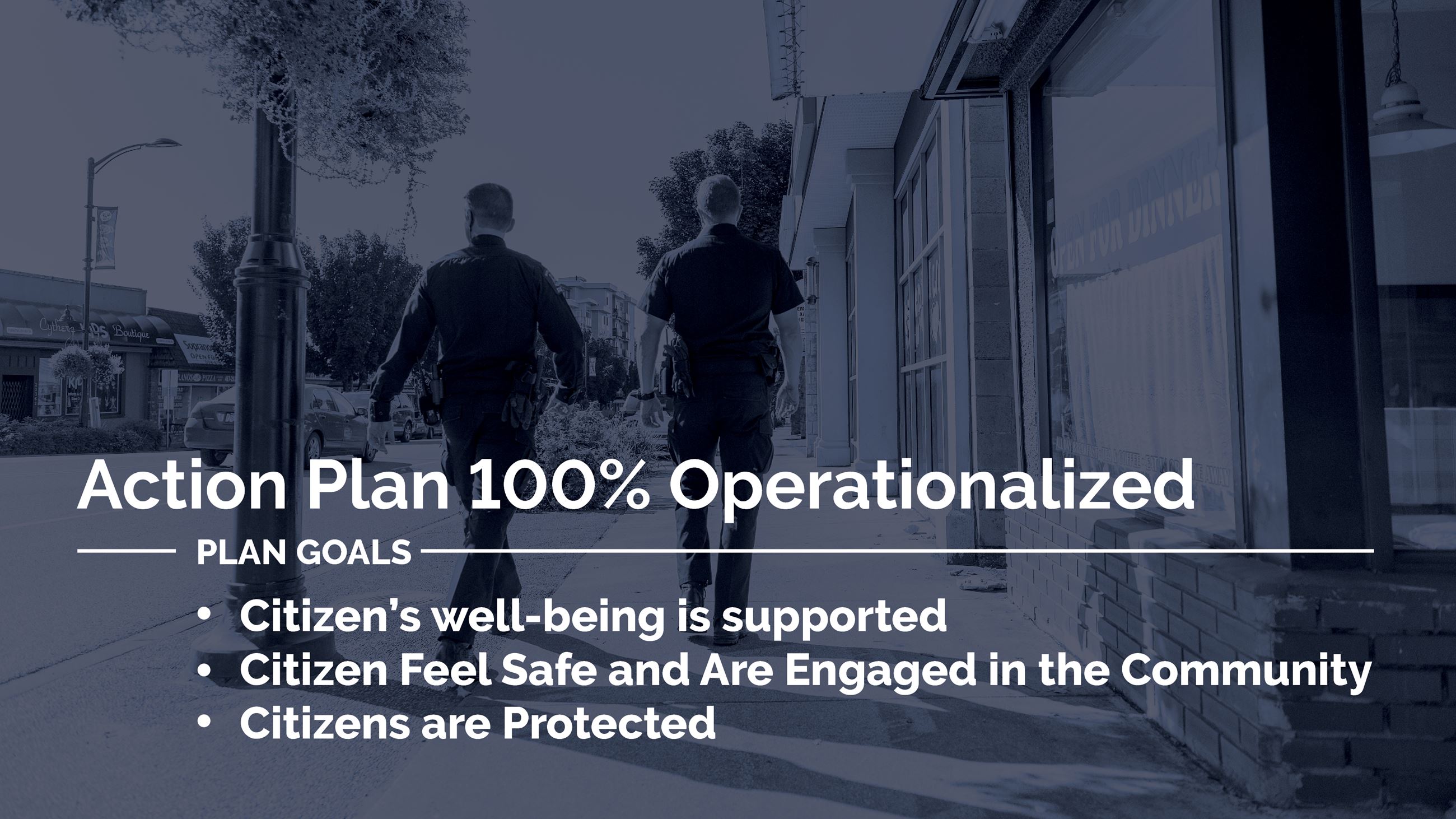 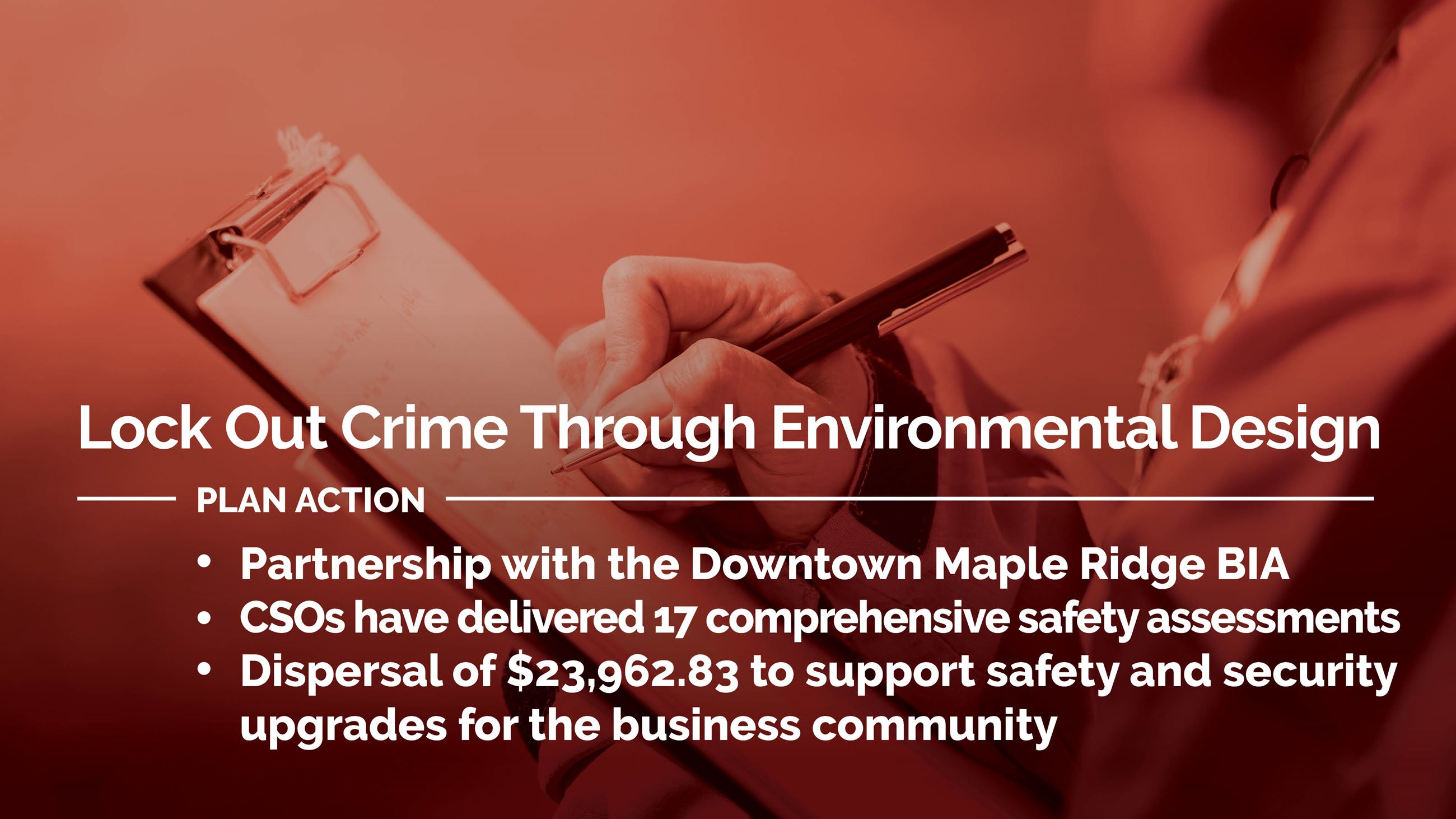 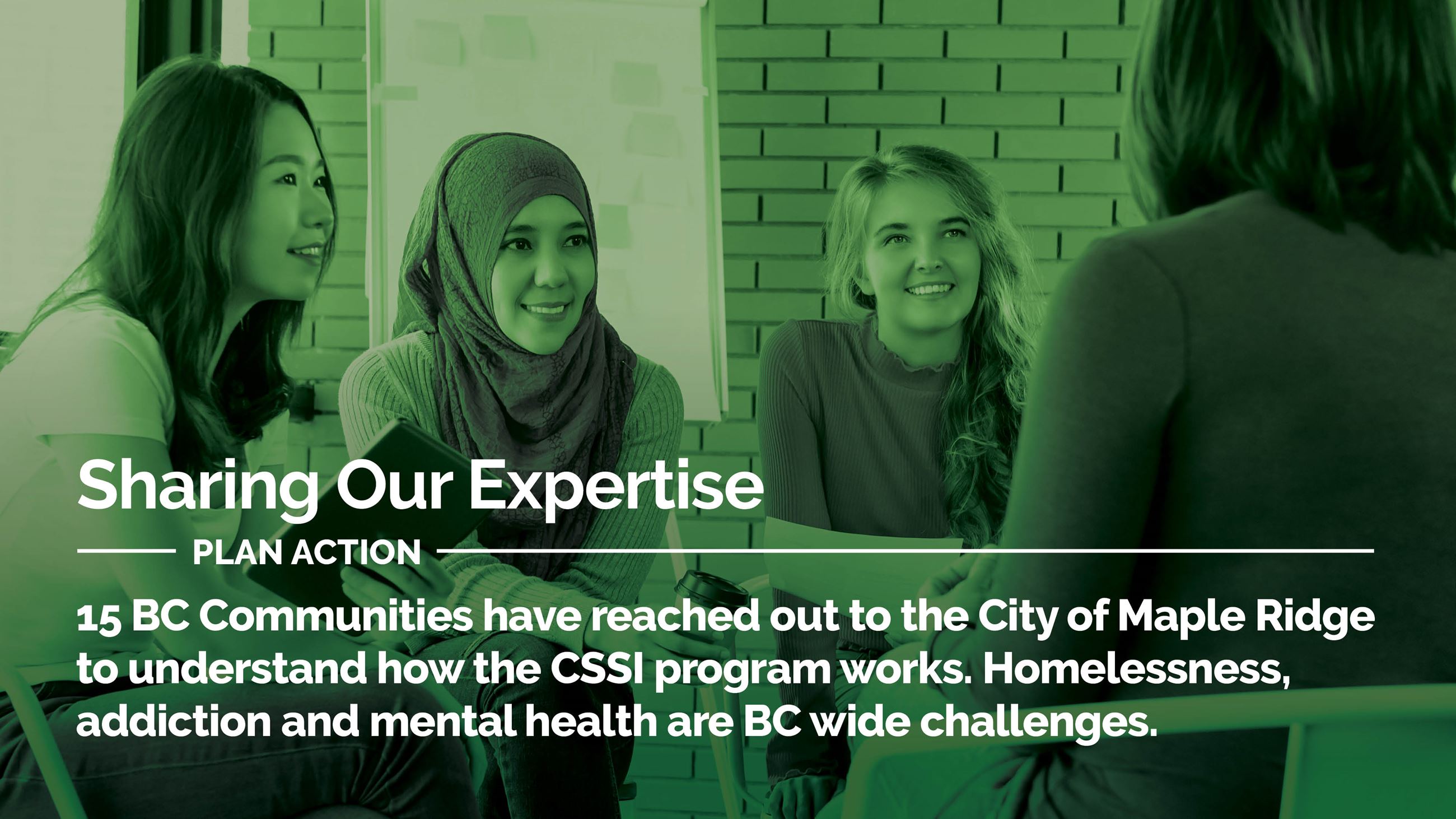 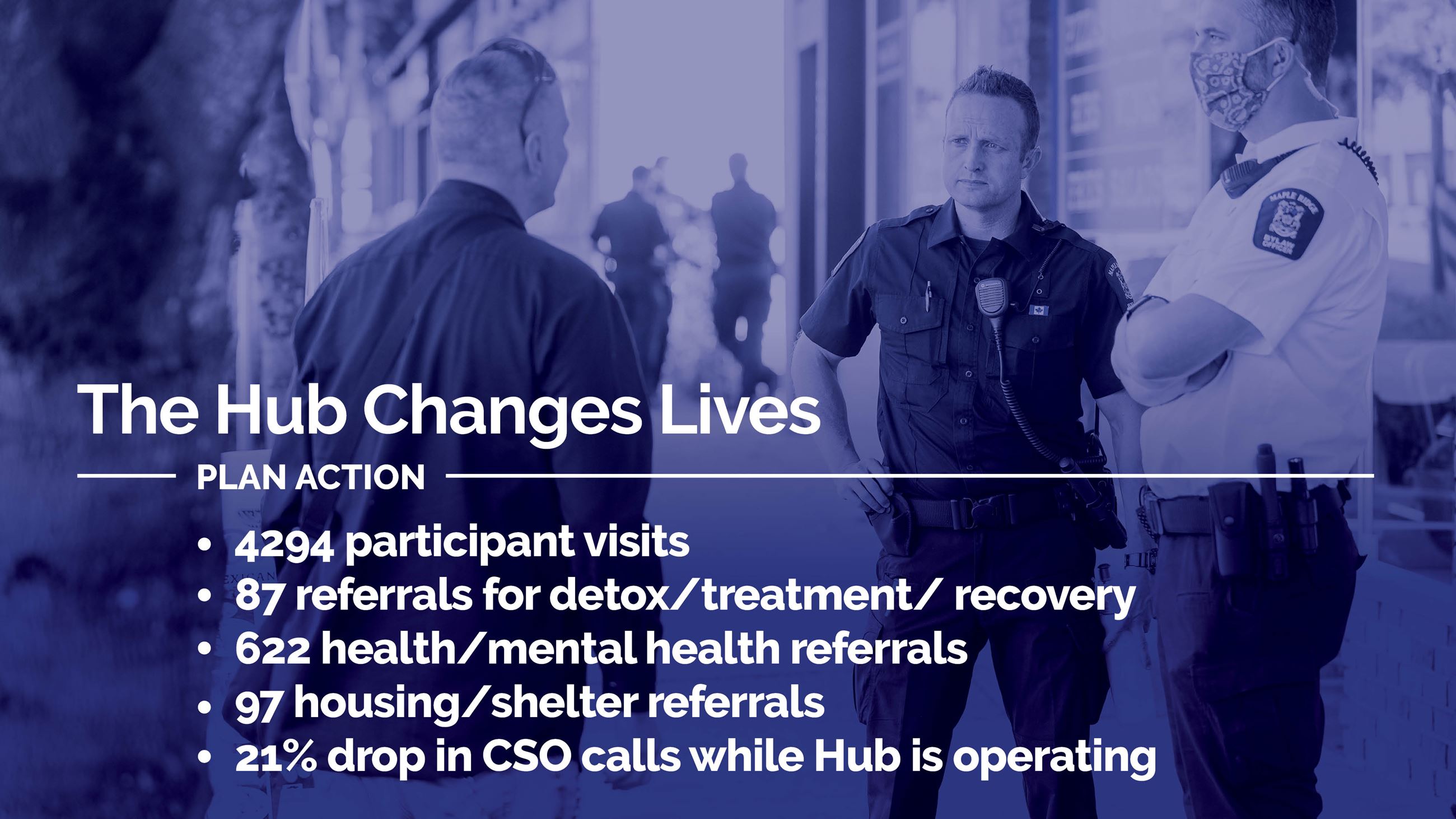 On Tuesday, June 28 Council received an update on the Community Social Safety Initiative (CSSI) from Chad Cowles, Manager of Community Safety. Mr. Cowles shared the news that the City’s CSSI Action Plan (Plan) is fully operationalized and that the multi-faceted initiative is attracting attention from around BC as the data continues to show the effectiveness on the front lines of the community.

Mr. Cowles noted that the 35 programs and initiatives within the Plan have been mobilized and credited the Community Safety Officer program as being a key component of the Plan. “Bringing together a team of people that are street smart, understanding, compassionate and committed to help people first has been the heart of the CSSI program,” said Mr. Cowles.

He continued, “I feel like I was set up for success as Council has been supportive of this Plan from day one and invested community safety dollars into building a team of people to encourage compliance and move the bar on community safety.

The presentation showed that in 2022 CSOs dealt with 165 homeless encampment files, removed 195 truckloads of garbage from public spaces and achieved a 93% file closure rate within 48 hours. He spoke about the collaboration with RCMP on ‘Project Daylight’ that sees CSOs and RCMP at work in the community starting at 6:00 am to ensure local businesses and their customers are not arriving to people loitering in their entrances.

Mr. Cowles noted that another important component of the Plan has been the Community Hub, funded by a $1.3 million Provincial and Federal Grant and initiated by a network of local community organizations, to serve people that are unhoused or under-served by social programs.

“One of the things our CSOs heard very early on in our deployment was ‘where do you expect me to go’ when we were interacting with people camping on private property or having negative interactions in the downtown,” said Mr. Cowles.

He continued, “The Community Resource Hub provides a place for people to access basic health care, food, a shower, and connection to treatment and support services that could literally change their lives.”

The report highlighted how the Hub has had nearly 4,300 visits in its ten months of operation. More importantly, Mr. Cowles noted that there have been 87 referrals to treatment and recovery and 97 housing referrals.

“This has been a game changer. We don’t want to just move problems around from place to place, our integrated approach and the collaboration between local agencies has allowed us to connect people with life changing services. City staff are volunteering to help people complete their taxes, claim benefits and get proper ID. Other Hub Team members are getting people essential medical care and submitting housing and treatment referrals. This program is about meeting people where they are and saying ‘how can we help you today,” noted Mr. Cowles.

The update spoke to the success of the ‘Lock Out Crime Through Environmental Design’ (LOCTED) program that’s being run in collaboration with the Downtown Maple Ridge Business Improvement Association (DMRBIA). CSOs have conducted 17 comprehensive safety assessments and businesses have in turn applied for grants to make safety modifications to their buildings. The City and the DMRBIA jointly funded a grant program and distributed nearly $24,000 to support these changes.

The presentation ended with an update on the work that is underway to move to ‘Hub 2.0’ and bring together a wide range of agencies to increase the capacity of the HUB pilot project.

“With the HUB in operation we see a 21% decline in CSO calls for service in the downtown core. This demonstrates the great value to businesses and citizens in the Town Centre,” noted Mr. Cowles.

At the end of the presentation Mayor Morden thanked his fellow Councillors for having the courage to try something different and invest local tax dollars from the Community Safety Reserves in a new and innovative approach.

“The CSSI is a demonstration project to show that there is a better way to address problems that are prevalent in every community. Fifteen communities in BC, that are tackling the same challenges many cities are seeing throughout BC and North America, have reached out to learn more about what we’re doing that’s proving to be a best practice,” said Mayor Morden.

He continued, “On behalf of Council, I want to thank Chad, our CSOs, along with the frontline team of dedicated, passionate people with great assessment skills, who have proven there is a better way through intervention. We dared to take a different approach, one that understands human behaviour and its underlying factors. This tier of service is a responsive, effective addition to our public safety program. We set municipal priorities to have police respond to the more serious criminal activity, and CSOs intervene on matters that call for different solutions. CSOs are purpose trained to work with persons who have complex problems, possibly mental and/or physical health, substance misuse, as well those who for various reasons don’t have a home. The team taps into the social safety net we have built around the existing service providers, in order to facilitate a pathway forward. Our plan, a first in BC, has been fully implemented within our financial limits. This city-led solution recognized societal problems shouldn’t necessarily default to the police, but often are best tackled under a model of collaboration. Council were mandated to take on what is predominantly a provincial responsibility, however we took this on because the business community and the public were angry, frustrated, and demanded we respond. We’ve done that, but there’s so much more work to do to pick up from the interventions our team makes every day, such as infill the gaps in the continuum of housing, demand access to treatment, healthcare, which are in critical demand, all of which are necessary when you’re building a complete livable, healthy and safe community for all.”

“We’ve been anxiously awaiting implementation of a $200 million investment into a Housing Plan that was offered by the BC Government, and accepted by the City. We didn’t agree on the new site for Royal Crescent temporary housing, a viable alternative was offered in two weeks as requested, but a provincial cabinet order was used once again. We’ve done our part, largely at municipal cost, collaborated in good faith, we’ve demonstrated our program works with corroborating data, but this program is contingent on partnerships. The provincially required housing assessment we undertook was resoundingly clear, there is an urgent need for housing for seniors, families and individuals who do not have complex problems, other than they simply cannot afford a home in our high cost region. This plan has always been about the building of an effective social safety net, intervention to facilitate better outcomes for people, a safe community for all, but best possible outcomes depend on prompt access to health care and housing,” said the Mayor in conclusion.

Click on the image below to view the full advertisement. 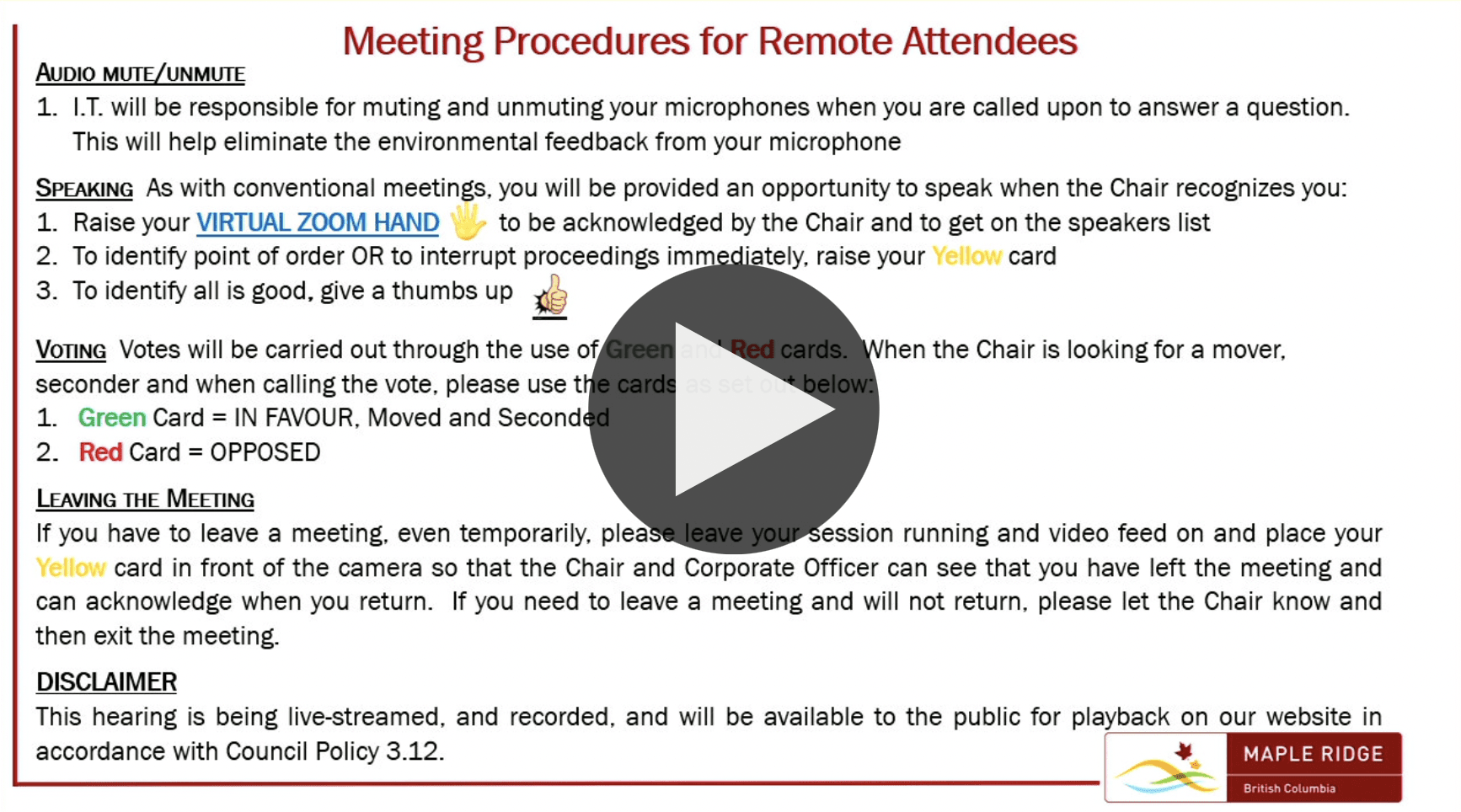 In July 2019, the City formally launched its Community Social Safety Initiative (CSSI). Our evolving community driven program responds to crime and social problems using appropriate intervention, the overarching goal being to create a fully functional social safety net for our City. The City-funded program is a first in BC that innovates in utilizing three tiers of public safety coupled with an integrated continuum of housing, health and social services.

To illustrate the success of the CSSI in a concise and informative package, the City has released a short video that highlights key components of the initiative, provides a snapshot of where we are today and why it is working.

“The CSSI is a responsive program that addresses the public’s call for a safe community while assuring people access to the help they need,” said Mayor Morden. “Council hears from the community that we are making a difference. It’s an evolving program implemented by some very special people, armed with compassion and understanding on social problems, that drive this important work that is truly reflective of the core values of our City and its people.”

In seeing the proactive approach and success the initiative is having in Maple Ridge, a dozen other communities in BC have reached out to see how they can implement similar programs that help eliminate the gaps in the social safety net that are proving to be a challenge for local governments around the province.

Key components of the City of Maple Ridge’s CSSI program include:

One of the cornerstones of Maple Ridge Council’s Strategic Priorities around Community Safety has been the Community Social Safety Initiative (CSSI). The Program, also known as ‘LEAD Maple Ridge’, takes a comprehensive and integrated approach to deal with social housing, health and social services, community safety and security, and also manages City resources and engages in community conversations. The City has brought together the organizations working in our community to help coordinate resources and advocacy to ensure that citizens who are dealing with homelessness, mental health, addictions and housing instability have a path to better outcomes. Housing supports have always been a key component of the CSSI program, and our hope is that the BC Government will become a collaborative partner by investing in housing solutions across the spectrum of needs. Here is a link to CSSI program information LEAD Maple Ridge Goals & Principles | Maple Ridge, BC

The City of Maple Ridge has developed a tiered and coordinated approach to enforcement utilizing private security, bylaw enforcement and RCMP. Specially trained Community Safety Officers (CSOs) are at the heart of the CSSI and deployed in the community 7 days a week, 16 hours a day to address the impacts of homelessness, addiction and the mental health challenges that are having an impact across BC. The CSOs are connected to the local service providers and help deal with individuals who are struggling in our community. Our goal is to help people get connected with the supports they need and improve their outcomes and to work with our community members to address negative behaviours impacting a feeling of safety in the community. Our CSO leadership team has been invited to share how the Program works with multiple communities across BC, a recognition that Maple Ridge is a leader in finding innovative solutions to difficult challenges being experienced in all communities in BC. Here is a link to background information on this Program and the overall Community Safety metrics. LEAD Maple Ridge Background and Resources | Maple Ridge, BC