The in-person Session will be held in the Blaney Room, Municipal Hall, 11995 Haney Place. Please use the Council Chamber Entrance on east side of City Hall Facing the RCMP Headquarters. For those unable to attend in person You can sign up for the Zoom Meeting option. The session is open to anyone, however is likely most relevant to people working in the development community.

Register in advance for this meeting: 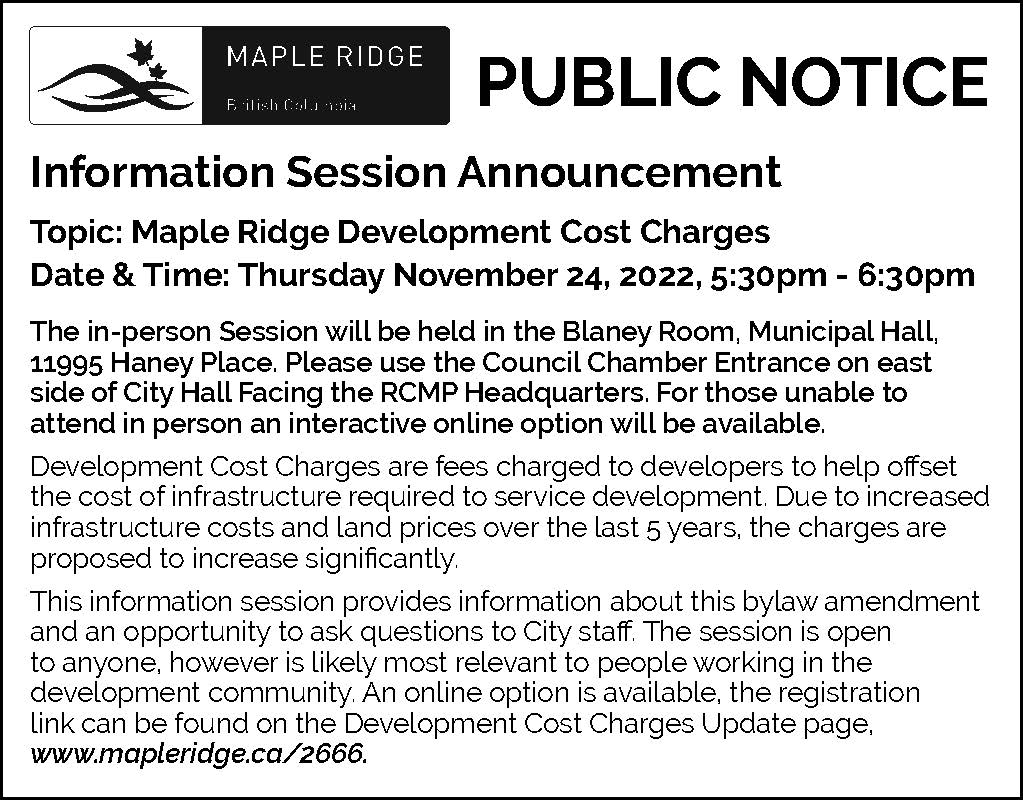 The City of Maple Ridge is proposing a revised series of Development Cost Charges (DCCs). These DCCs will help pay for transportation, water, sewer, drainage, park acquisition and some park development projects which are necessary to service the community due to growth.

What is a development cost charge?

Per the Local Government Act, DCCs are levied on new development to pay for the costs expanding and upgrading infrastructure to meet the needs of growth. The can be used for roads, sewers, drainage and water works as well as parkland acquisition and park development. DCCs allow the City to fairly distribute growth related costs across development.

DCCs are paid by applicants for:

Note: developments are exempt from DCCs when the value of work authorized at building permit does not exceed $50,000 as per the DCC Bylaw. The Local Government Act specifies additional provisions for DCC exemptions. See the Planning and Development front counter staff for details.

What kind of projects are DCCS used to fund?

What are DCCS not used for?

DCCs do not fund infrastructure that services existing residents and businesses, nor do they fund operation and maintenance costs for roads, water, sanitary and storm infrastructure, and parks. DCCs cannot be used to fund fire halls, ice sheets or arenas, pools or recreation centres, civic facilities or parking lots. Some types of park improvements, such as tennis courts, basketball courts and synthetic fields are not eligible.

What are DCCS proposed to be changed?

In Maple Ridge, the last DCC rate adjustment was done in 2017, based on 2016 capital costs. The City is proposing to undertake a minor amendment at this time as the costs of land and construction have increased significantly over the past six years. After infrastructure master plans and development assumptions are amended a major DCC bylaw amendment will be needed.

How are DCC projects and growth projections determined?

Next Steps (Following the 1st Reading)

How are DCCs calculated?

What are the proposed DCC rates?

New DCC's will be effective at bylaw adoption; however, provincial legislation provides one-year in-stream protection for building permit, subdivision and precursor (re-zoning and development permit) applications that are complete and received prior to adoption of the new bylaw. See the Planning and Development front counter staff for details.

For more information and any comments, please contact the Finance Department at 604-467-7472 or email budget@mapleridge.ca

The video of the presentation for the DCC Bylaw can be found at 03:21:10 of the video at this link City of Maple Ridge - All Presentations - Committee of the Whole - July 19 2022